After a good sleep and some updates on live tweets, early morning travel to Pushkar was something I was looking forward to. Hotel manager- Dibendu helped me in booking a direct bus which starts at 9.am from close by bus stop by Jai Ram travel directly to Pushkar.  A ticket of INR 170 takes you fromJaipur to Pushkar in 4 hours and good mini bus. I was surrounded only by foreign tourists which was a tour arranged by the group by G Adventures.

So they travelled for 15 days in India to places like Delhi, Agra, Jaipur, Goa..etc told by their tour leader Mr. Zahid Bari. Mostly Handling vibrant tours of India, they have mix of elite, budget tours ,etc . Met David from Australia and many others from the tour and asked their till now experiences of India. The only words I could remember is “ Beautiful, Vibrant, Warm people, Great Culture” ..and these words always make me proud.. The journey through small villages on the way to Pushkar..Landscape of hills…every 10 mins a temple made the journey serene from the mundane work….

Reached the Pushkar main stop , around 1pm.. and there was already plan of @photokatha meetup with @snagpal @shaylnee, @aks_hai and @ldnbcn.. at Out of the blue restaurant. To reach this restaurant, cyclists taking people in small box like sitting  (In hindi it is called haath gadi ) was the only way to reach the restaurant as it was far by 20 mins .,which was in the main market. . The first glimpses from Pushkar, was only about colors, priests of different styles and colors, food sold in random things, foreign tourist more than locals. 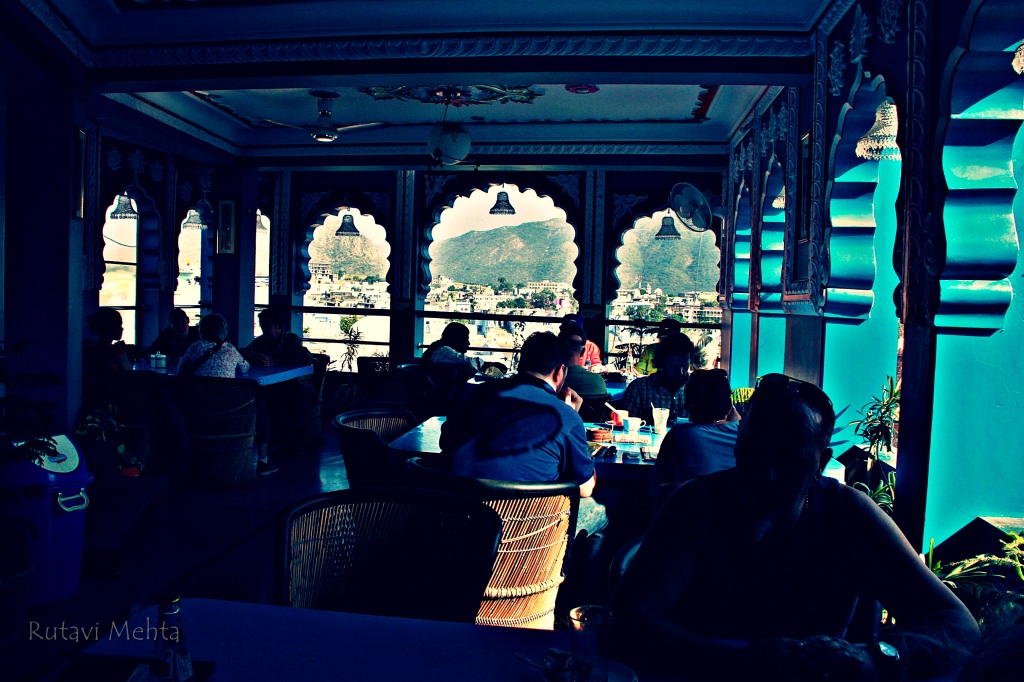 Out of the Blue Restaurant 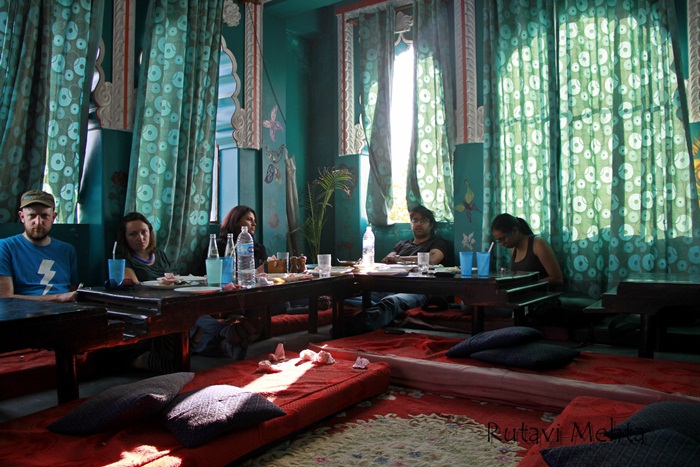 Out of the blue restaurant had great eye view of Pushkar ghats, and striking ambience of blue.You had to climb 2 floors to be in the restaurant where you had floor seating style with comfortable tables and lounge beds.  And you get great overview of Pushkar. 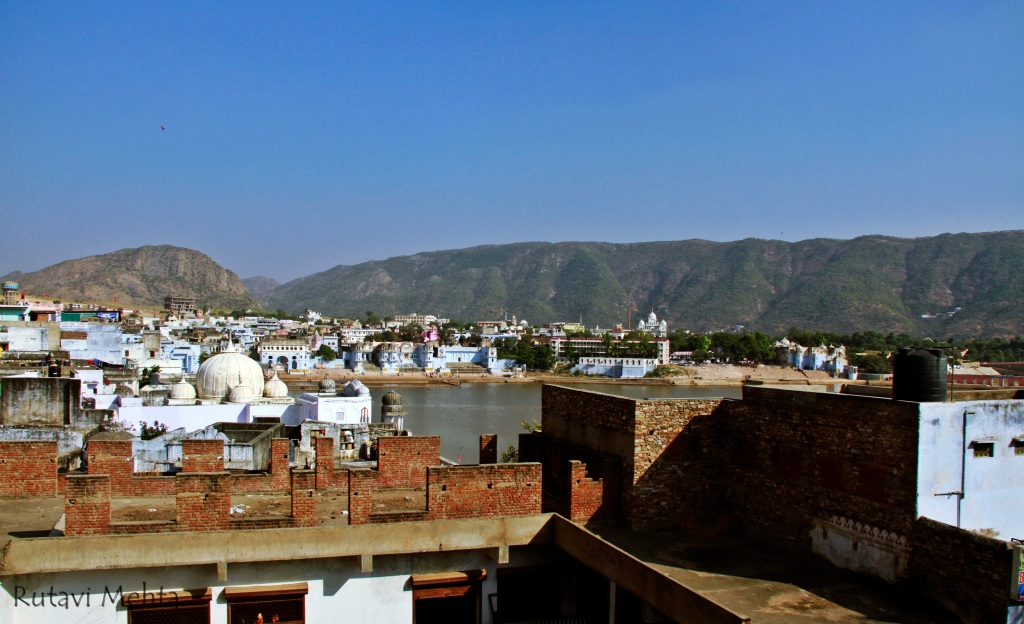 With such a heavy travel, this was THE  place for lunch I was contemplating. So we did mix of orders like Italian with Gnocchi pastas , Indian dishes like Paneer and malai kofta. Hummus is something you shouldnt miss at this place. unique about this place was that guests didn’t give feedbacks here on paper. The entire wall was covered with feedbacks from guests After the stodgy lunch, now was the time to settle the luggage before I get drained even with that small luggage.

Please note being solo traveller, meeting new people from twitter with the help of @photokatha did raise eyebrows to some of the people. However this meetup was really helpful, as shared cross-country experiences, photography, travel, India Culture,etc.  Shaylene ( Met through twitter) had already booked a room in Amika Guest house..where she was paying INR 500 per day only.. For an extra person it was only INR 200 which was good deal for both of us. The guest house was right opposite Varaha Ghat which was supposed to be the ghat for Maha Arti as well. So feeling comfortable the amount of distance to be walked is cut down and major evenings would be shot by Ghat side. Pushkar being city with small lanes, and less transport during such festivals, backpackers should always carry handy bags and fewer luggage. So from restaurant, I walked about 15mins till my guest house was seen. Passing by  colourful shops selling rajasthani bits and pieces.The guest house had very old era appearance with wooden doors and chains locks. As you enter ,you get this atrium surrounded by wooden stairs and rooms, where during those times one could shout out for water downstairs(during those dates water was  never available in the room.It gave me a feeling of my hometown in kolhapur. Reaching room, which was very small, with pista colour , I decided this would be the place just for sleeping. Now you cannot expect in Rs.200 , you get the best of facility.

A travel & lifestyle blogger who loves to travel on her own terms and discover stories while she makes connections with the ocals. She is so adventurous that she was the only Indian Travel blogger who rode a rickshaw for 3000km. She strives to be unique in her travels.

India, Travel
What you need to know to become a certified Yoga teacher
Travel
Gudauri-Marcopolo Hotel made us feel as family!
Travel
Love travelling? Here’s why Term INSURANCE is must for you

This error message is only visible to WordPress admins